POLLERA
“Pollera” is a traditional costume of Panama worn by women. It originally came from Spain during colonial times.  It is basically a blouse and long skirt, which in Panama acquired its own characteristics, differiating itself from Spanish dress and other Latin American dresses of Spanish origin. Pollera is formed by multicolored cloth and embroidery. It can take around 8 months to make a complex design of Pollera. In addition, Pollera is also decorated with jewelry over the blouse, and the head of the woman is adorned by tortoise shell comb (peinetas) and beaded hair decorations (tembleques).

Women wear Pollera in special events such as Carnival, folklore events, and town festivities. It has received international awards due to his complex design. In view of its cultural importance, Panama celebrates the Pollera Day every year on the July 22.

La Montuna Ocueña is a casual traditional dress worn by women in the town of Ocu, Province of Herrera. It is composed of a white laced blouse, three-layered skirt with white bias in each division. La Montuna Ocueña is also accompanied by other accessories such as white hat decorated with natural flowers, earring, beaded necklaces and a shawl. 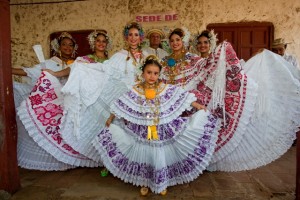 FORMAL MONTUNO
This traditional dress worn by men is used during town festivities, national celebrations, and particularly when performing Panama folk dances, together with women wearing Polleras. It consists of a white long-leeve shirt and closed neck (Camisilla), black long pant, traditional straw hat with black lines (Sombrero Pintao), small bag hanging on the left side of the body (Chacara), and black and white shoes (Chinelas).

MONTUNO OCUEÑO
Montuno Ocueño is a more casual traditional dress worn by men, which is composed of a shirt (Cotonoa) and knee-length pant (Chingo). Montuno is well known for its colorful and beautiful embroidery, which is found in part of the neck, shoulders, front, cuffs, and around the lower edge of the shirt. The design of embroidery looks like geometric forms of flower and animals.
Chingo is also adorned with similar embroidery.
Other accessories include a white straw hat (Sombrero Tipico), sandals (Cutarras), and long knife wrapped by leather case (Machete).

MONTUNA OCUEÑA
Montuna Ocueña is a casual traditional dress worn by women in the town of Ocu, Province of Herrera. It is composed of a white laced blouse, three-layered skirt with white lines in each division. Montuna Ocueña is also accompanied by other accessories such as white hat decorated with natural flowers, earring, beaded necklaces and a shawl.

KUNA
Kuna Indian women of San Blas region wear a skirt and multicolored blouse, decorated in the chest and the back with “Mola”, which is a hand-made fabric with attractive geometric design of animal and scenes of daily life.  Also they wear red scarf on the head and golden accessories on arms and legs. 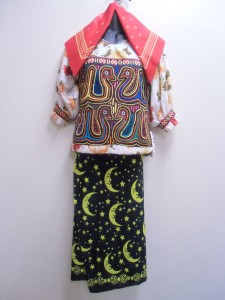 NGOBE BUGLE
The typical female dress of Ngobe Bugle native group consists of a wide gown made with colorful materials. It is adorned with geometric patterns at the ankles, around the waist, sleeves and neck. They are also accompanied by a hand-made colorful necklace called Chaquira. 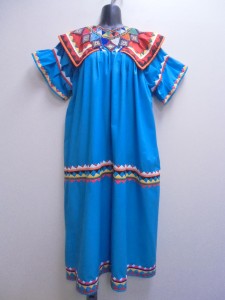