Tolls « EMBASSY OF PANAMA IN JAPAN

In October 2002, Panama adopted a new Canal tolls structure. The structure in force until then, which dated back to 1912, was based on a rate per ton applicable to all ships. The change was based on ship size and type and provided for separate locomotive usage rates. This more equitable system that is now is applied according to the transit needs of each ship, allows each vessel to be charged for the specific services it uses.

In 2005, the ACP implemented a change in its admeasurement system applicable only to full container vessels and those vessels with container-carrying capacity on-deck. The full container vessel adjustment modified the traditional measure utilized as the charge basis for these vessels, from PC/UMS Net Ton to a twenty feet container, or TEU (“twenty-foot equivalent unit”) and established the total TEU capacity, including on-deck, as the basis for the new charge. The implementation was conducted over three years, beginning on May 1, 2005, and culminating on May 1, 2007.

For other vessel types with on-deck container carrying capacity, the ACP continues to apply the PC/UMS tonnage to measure the enclosed spaces and spaces below deck, and charge a per TEU fee to the actual number of containers carried on-deck, in accordance with the first table.

Prior to the implementation of the new system the ACP charged full container vessels for a small portion (8.78%) of the cargo transported on-deck and applied the PC/UMS net ton to enclosed spaces and below deck.

In 2007, continuing with the price differentiation efforts begun in 2002, the ACP modified its regulations for the admeasurement of vessels and the tolls system of the Panama Canal to more closely align Canal toll charges to the value of the route. In the case of passenger vessels, the ACP assessed tolls based on the maximum passenger capacity in accordance with the International Tonnage Certificate 69, or the vessel’s passenger ship safety certificate; vessels over 30,000 gross tons and whose PC/UMS ÷ maximum passenger capacity ratio is equal to or less than 33 were charged on a per berth basis. Following are the tolls in effect from 2007 to 2009: 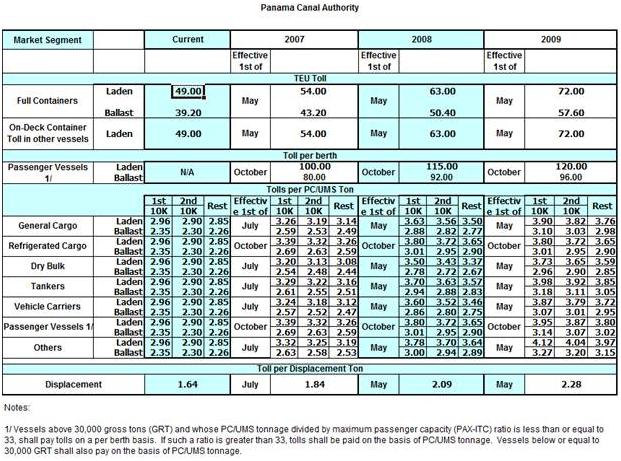 During informal consultations between November 2009 and April 2010, the ACP presented to the industry a new price structure. Upon consideration of the suggestions received, the ACP developed a new proposal, choosing to postpone the implementation of the new tolls until January 2011.

On the basis of discussions with industry representatives, shipping lines, and government representatives, as well as the Canal’s own internal analysis, and in view of the the global economic situation, the ACP decided not to proceed with a tolls adjustment in 2010 and set January 1, 2011 as the new date for implementing the tolls for all segments except reefers.

Specifically, the ACP calculated container segment tolls with a slight price adjustment to the capacity charge, and an additional new charge applicable to the number of loaded containers aboard the vessel at the time of transit. The reefer segment increase portion applicable to the PC/UMS tons was effective April 1, 2011.

The approved 2011 tolls were as follows: 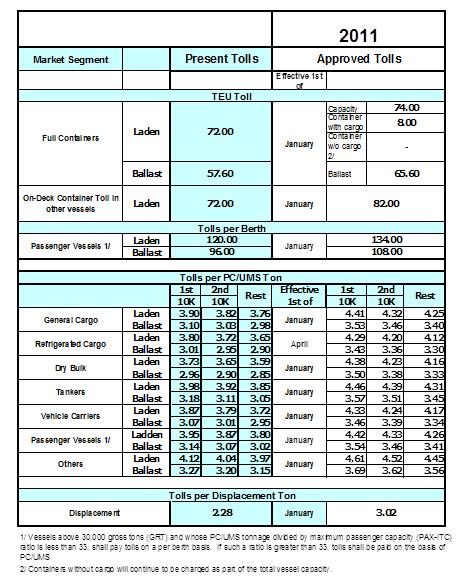 The segmentation scheme has been a key element in the design of the Panama Canal price structure. The ACP is continuously evaluating the value of the route through Panama against other alternatives for each segment. An analysis of the value of the route by segment has revealed that among the vessel types established in 2002, there are significant differences in modes of operation and types of cargo transported, which merited a reconsideration of their definition.

In order to continue to more closely align Canal toll charges to the value of the route, it was approved to: (1) redefine the tanker segment in three segments, petroleum and petroleum products tankers, gas vessels that carry LPG (liquefied petroleum gas) and chemical vessels, each with its own specific vessel type; (2) redefinition of the vehicle carrier segment whereby the ro-ro vessels are incorporated into the vehicle carrier segment, given that the value of the route is the same for these two vessel types, to be known from now on as the “Vehicle Carrier and ro-ro” segment.

It was approved to increase in general terms, the tolls of the specifically identified segments, in accordance with the structure presented in the following table: 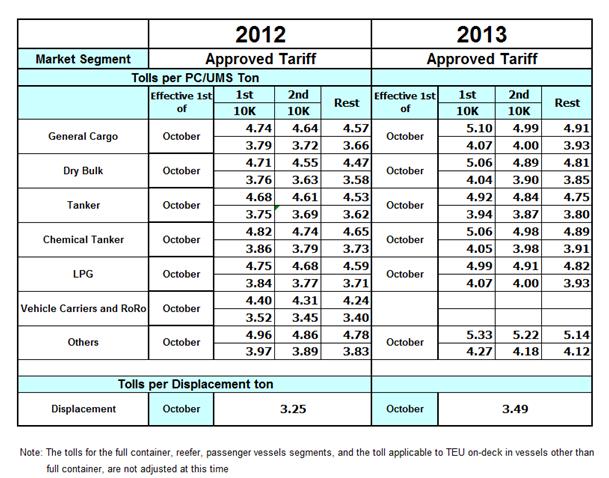 The Panama Canal replaced their 100 locomotive fleet in its entirety, purchasing them from a Japanese company. Each locomotive cost US$2.1 million; therefore the total investment was US$210 million.